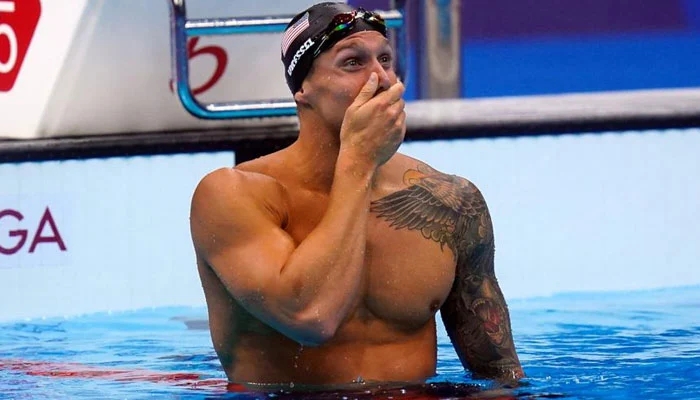 Swimmer Caeleb Dressel has won the first individual Olympic gold of his career in the men’s 100m freestyle.

The American swimmer held off the defending Olympic champion, Australia’s Kyle Chalmers, to win by 0.06 seconds. Dressel’s winning time at the Tokyo Aquatics Centre was an Olympic record of 47.02 seconds.

I don’t know if it’s set in yet. It’s been a really tough year, really hard. I’m really happy,” he said in tears as he was connected via video link to his wife and family back home.

Dressel missed out on the individual sprint medals at Rio in 2016, but he has since exploded, winning an incredible 13 titles over the past two world championships.

He went to the turn in front but had to dig deep to hold off a storming Chalmers, smashing the previous Olympic record of 47.05 held by Australia’s Eamon Sullivan since 2008.

“I left everything in the pool. I gave everything I could,” said Chalmers.

It was Dressel’s second gold of the Games after spearheading the United States to the 4x100m relay title on Monday.

He will also race the 50m freestyle and 100m butterfly, and could feature in two other relays to keep his dream alive of a six-gold medal haul.